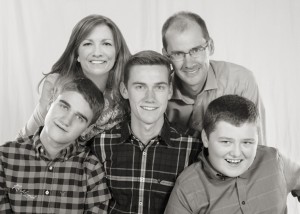 Hi everyone!  This is our family.

Dad is Bryan Jepson.  He is an emergency medicine physician that works for UC Health ER in Colorado Springs.  He is from American Fork, Utah originally (Home of the Cavemen!) and went to college and medical school at the University of Utah (Go Utes!)  He did an emergency medicine residency in Grand Rapids, Michigan and is board-certified.  In 2002, shortly after Aaron was diagnosed with autism, he and Laurie started a non-profit clinic in Utah, called Children’s Biomedical Center of Utah, with the help of their close friend, Alan Mendel.  The clinic was focused on providing biomedical treatment to children in the Rocky Mountain region and to increase awareness of the importance of the autism issue.  In 2006, he was recruited to join and help build Thoughtful House Center for Children (now Johnson Center for Childhood Development) in Austin, Texas, which was a multi-disciplinary center specializing in the treatment of children on the autism spectrum (including nutritional services, biomedical services, behavioral services, gastrointestinal services and research.)  He worked there until 2011, when he returned to emergency medicine, although he continued to treat children part-time at Integrative Sports and Wellness Medical Center in Austin.  In June of  2015, they moved to Colorado Springs, CO, where they currently reside.  Over the course of the 13 years that he spent in direct patient care, Bryan had the pleasure of interacting with thousands of children on the spectrum and their families.  He was also privileged to speak at conferences all over the world in advocating for biomedical intervention for autism.

Mom is Laurie Jepson.  She was born in Rexburg, ID and lived in several places during her formative years, including Utah, Pennsylvania and Colorado.  But, it is Evergreen, Colorado that she calls home.  Before marrying Bryan in 1993, she was a family foster-care consultant for Utah Youth Village, a non-profit center for troubled youth.  Since moving to Michigan for Bryan’s residency, Laurie has focused all of her time and talents on raising three children, two of whom have significant special needs.  She was instrumental in researching and implementing the many treatments that they have used for their two boys with autism, including ABA, dietary interventions and biomedical treatment, all the while supporting the effort to bring attention and access to treatment to countless other families.  She is a true warrior “Autism mom.”

Ben is the oldest son.  He has the challenging role of “autism sibling.”  With two special needs brothers, Ben has been remarkable in supporting his parents and frequently putting his own needs aside temporarily while his brothers issues were acute.  Ben was a track star in high school and ran for the cross-country and track team at the University of North Texas during his freshman year of college.  He is currently serving a two-year mission for the Church of Jesus Christ of Latter-day Saints in the Brazil Florianopolis Mission.  When he returns, we look forward to hearing his own contribution to this blog.  Siblings of special needs kids have an invaluable perspective and are incredible people themselves.

Aaron is the second son.  He was diagnosed with regressive autism at age 3.  He has patiently undergone innumerable hours of therapy and treatment during  the 15 years since.  Each of the treatment modalities played a role in his progress, but in spite of this “full-court press”, he continues to have significant impairments.  At approximately age 16, however, he made a major breakthrough in his ability to communicate.  It started out with spelling on a letterboard using the Rapid Prompting Method developed by Soma Mukhopadhyay at the HALO (Helping Autism Through Learning and Outreach ) center in Austin, TX.  This later progressed to being able to type on a keyboard on a computer or an I-Pad.  This ability to communicate has opened up Aaron’s world and he is now able to express his thoughts and feelings and has reinforced to all of us how intelligent and thoughtful that individuals with autism are, when given a mechanism to communicate effectively.

Austin is our youngest and joined the family in November of 2008, at the age of 7.  He had a challenging beginning to his life, born to parents who were unable to properly care for him.  He eventually was removed from their home at age 5 and placed in foster care.  The Jepsons became aware of him through a local news program that highlighted children in need of adoption.  They had an overwhelming impression that Austin was supposed to be part of the Jepson family.  Since then, Austin has made significant progress and continues to show improvement. He is completely non-verbal and has significant delays in normal development but, like Aaron, he has the ability to type on the I-Pad and show us that he is also an intillegent and capable young man.   And he has a killer smile!